Winnie Odinga, the daughter of ODM leader Raila Odinga, turned to social media to thank her fans for their heartfelt birthday greetings.
She recently celebrated her 32nd birthday, stated that she treasured every birthday greeting she received.

Her nicest gift was being reminded of how fortunate she was to have such amazing friends and family.
The tricenarian complemented her post with a lovely shot of herself sitting by the pool in tiny shorts.

“Thank you so much for making my birthday so special. To me, every birthday wish was unique.

The finest gift was being reminded of how fortunate I am to have such lovely friends and family.

I give thanks to God for all of my blessings “Winnie remarked.

Invited to lunch, a brave man used the comments section to take aim at the former premier’s daughter.

Muhammad Onyango, a tweep who defines himself as a social media influencer, invited Winnie to Kilimani for lunch.

Onyango also mentioned that he had her birthday present. Fortunately, but sarcastically, the 32-year-old accepted his proposal.
She did, however, request that Onyango send her bus money before she came. 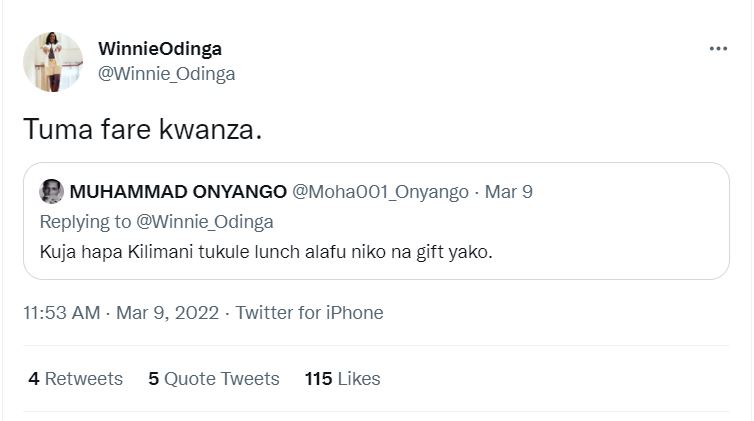 Winnie Odinga has had several marriage offers in the past from guys who she blew away with her attractiveness.

In 2019, Sammy Gunga of Mombasa tweeted to Raila, most likely immersed in love that knows no bounds.

proclaiming his adoration for him and even requesting that the Opposition leader allow him to marry his last born daughter.
Gunga, who was brave enough to voice his thoughts, tagged Winnie, perhaps to show that his proposal was genuine.

Winnie Odinga, also known as Kazi among her family and friends, was torn between accepting Gunga’s gift and laughing him off.
Odinga’s daughter also revealed that she will marry after they elect her father president.

ALSO READ: A Polygamous Luo Man Does This For His 2 Wives Causing Envy Among Kenyans

She joked that her wedding will take place soon, in response to newly nominated senator Ngugi’s statement that he was seeking for a first wife.

The 31-year-old welcomed Kenyans to her wedding, which she said will take place on the lawns of State House in Nairobi.

She said this during a meeting with Mt Kenya youngsters on Tuesday, October 12, last year.