Pandora’s papers have exposed money syndicates by powerful leaders in the world and international organizations.

Over 600 journalists from 150 media outlets in 117 countries take part in the Pandora Papers investigation.

This makes it the world’s largest-ever journalistic collaboration.

They based the investigation on the release of confidential documents from 14 offshore service providers .

Owners can use the entities to conceal their identities from the public and, in some situations, regulators.

They regularly enlist the help of providers to open bank accounts in countries with loose financial regulations.

These leaders used proxies to stash billions of shilling in offshore accounts. Paper trails by the Pandora expose ended at these leaders.

Other world leaders exposed include the Azerbaijan president, the president of Jordan, and many African former presidents.

Uhuru and six members of his family secretly owned a network of offshore companies.

This is according to records got by the International Consortium of Investigative Journalists (ICIJ).

They shared this record with over 600 reporters and media organizations around the world.

They linked the Kenyatta family to 11 companies, one of which was valued at $30 million in assets.

But one wonders why the pandora’s paper report only features one African president.

Does it mean that Uhuru Kenyatta is the only corrupt president in Africa? That is a fat lie.

This report has some political connotations for meant to undermine his fight against corruption and propel their preferred candidate.

We all know that Kenya is facing political transition period and the stakes are high.

Different people and nations of the world have interests.

These interests mean they have to do everything out of the book to influence the voting patterns.

Nobody is saying that the Kenyatta family is clean.That no African president has featured is suspect.

The fact is that the pandora’s paper did not prove that they stole the money stashed there.

Besides, all those transactions happened before he became president in 2013.

Kenyatta family is richer than 3 billion in those offshore accounts, going by the value of the companies they have here in Kenya.

William Ruto’s allies have celebrated the expose, and feels Uhuru has been targeting them when he is the one stealing public resources.

This begs whether this report is a propaganda tool run by William Ruto’s foreign sympathizers. 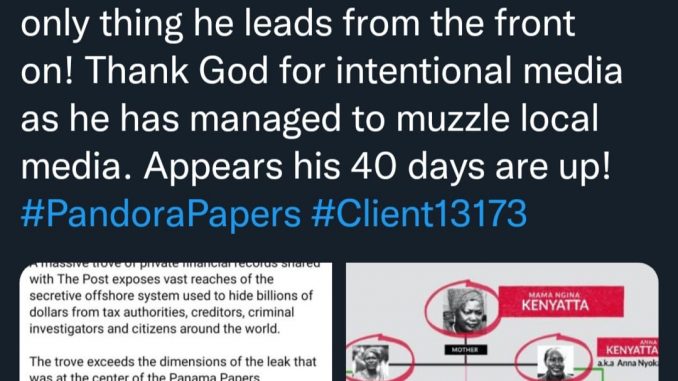